Tottenham and England star, Dele Alli appeared to be struck by a plastic water bottle thrown by an Arsenal supporter after he scored his side’s second goal of the Carabao Cup quarter-final at the Emirates.

But with just over 20 minutes, he was struck with a water bottle on the back of the head as he attempted to collect the ball for a throw-in.

“Yes I saw. When we play a derby we hate each other in a good way, but that looks in a bad way when you want to damage some people. One stupid person made a mistake. I respect the Arsenal fans. I hope that Arsenal take some responsibility. Through the camera you can identify. It wasn’t a problem but it could be a big issue. I think they will identify the people” he said.

There also appeared to be other objects thrown by Arsenal supporters into the section occupied by Tottenham’s fans as the atmosphere turned toxic. The shocking incidents came after a Tottenham fan was banned for four years after being found guilty of throwing a banana skin at Arsenal’s Pierre-Emerick Aubameyang when the teams met in an acrimonious clash earlier this month.

See the video below…. 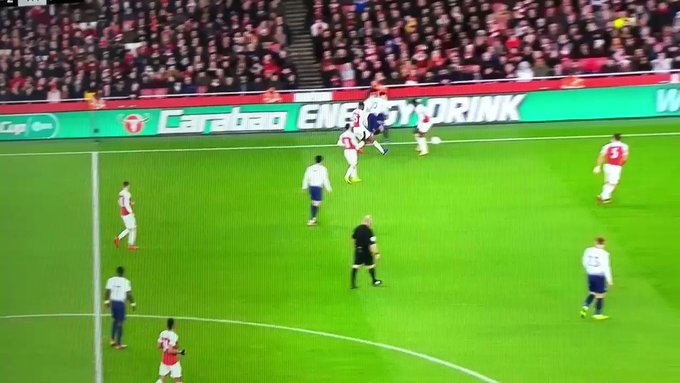 Arsenal fans throw a bottle at Dele Alli, he responds in the most Dele Alli way possible