New Arsenal manager Unai Emery has reportedly demanded three signings for the club after being named as Arsene Wenger’s successor.

The Spaniard takes over from Wenger knowing the present Gunners squad is in dire need of an overhaul following two dreadful Premier League campaigns.

And according to the Mirror, Emery has demanded for three-man summer signings as he aims win the title in his first season at the Emirates. 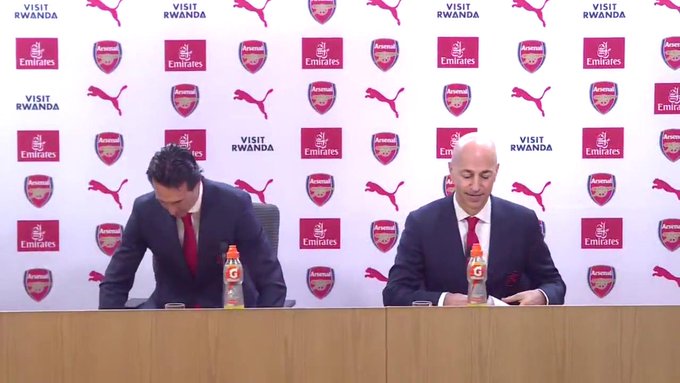 The London club have recently dismissed talk of letting Petr Cech go by giving the veteran the number one shirt Bayer Leverkusen Bernd Leno is number one on his wishlist.

But Emery wants Leno who could leave with just two years left on his current deal with the Bundesliga side.

Borussia Dortmund ace Sokratis Papastathopoulos is also on his radar with Shkodran Mustafi primed to be shown the door the Greece international’s signing may be accelerated.

The Nice midfieder blossomed in Ligue 1 and can be signied by activating his £35m clause in his contract.

Emery had been a huge admirer of the player while he was manager at his former club Paris Saint-Germain and with regards to Arsenal, he is determined to succeed where he failed before.

Meanwhile, the ex-Sevilla manager has sent a promising message to fans this morning.

“I am thrilled to be joining one of the great clubs in the game,” he told the club’s official website.

“Arsenal is known and loved throughout the world for its style of play, its commitment to young players, the fantastic stadium, the way the club is run.

“I’m very excited to be given the responsibility to start this important new chapter in Arsenal’s history.

“I have met Stan and Josh Kroenke and it’s clear they have great ambitions for the club and are committed to bringing future success.

“I’m excited about what we can do together and I look forward to giving everyone who loves Arsenal some special moments and memories.”